As you cycle, without even trying, you will improve your mental and physical health, leave no carbon footprint and reduce pollution and congestion in your area. There is also a growing amount of evidence to suggest that cycling or other exercise can reduce fatigue.

So if you have decided to take the plunge and begin cycling, you will need to decide what type of bike to buy. There is a large range of bikes out there, and at least one will suit your needs perfectly. Here is our simple guide to the various types. 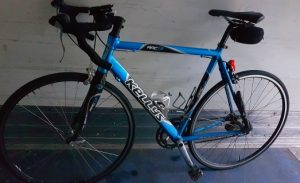 You will recognise this bike if you have ever seen a group out training on a Sunday morning, or if you have ever watched a professional cycling race like the Tour de France.  These bikes are designed for speed.  Various features of the design such as the dropped handlebars keep the cyclist in the best possible riding position to achieve maximum speed.  While this is a big advantage when racing it may prove to be a little uncomfortable for general use.   If you are simply getting back on your bicycle to get a little exercise, or for the purpose of commuting, then this is probably not the bike for you. If you do become an avid cyclist and you fancy graduating to something faster, then you can always switch to a road bike in the future.

In general, mountain bikes are used for cycling off road — on everything from relatively smooth gravel trails to “extreme” terrain. They feature wide tyres and suspension. Some feature both front and back suspension, while others known as “hardtail” have front suspension only.  Mountain bikes have a large range of gears at a low range to allow for cycling up steep hills. While they are perfect for cycling over rough terrain they are much slower on paved roads than other bicycle types. The sitting position is more upright than on road bikes, and may feel more comfortable if you have not been on a bike for some time. It might be worth considering purchasing a mountain bike if you think you may do some cycling on forest paths or other off-road tracks, or if commuting by way of a rough path is an option for you. 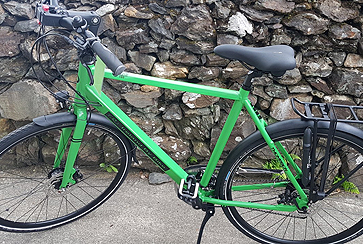 These bikes are like a cross between road and mountain bikes. They have a large range of gears. Their tyres are wider than a road bike but narrower than a mountain bike. The sitting position is more upright than a road bike. They may or may not have front suspension. Hybrid bikes without front suspension are often referred to as urban or city bikes, (which is a little confusing because they are perfect for cycling on rural roads.) Hybrid bikes with front suspension are often referred to as cross bikes, due to their suitability for some off-road cycling.

To get back to cycling after a long break, or for relaxed touring or commuting, hybrid bikes are probably the best choice. To decide whether you need to opt for front suspension or not, ask yourself what type of terrain will you be cycling on. If it is mostly smooth paths or roads, there is no need for the extra cost and weight that comes with front suspension. If, on the other hand, you think you may venture onto rougher terrain once in a while, a front suspension fork is a good option.

These bikes have a very relaxed upright sitting position, by way of their raised handlebars. They have quite large “balloon” tyres. As the name suggests, they are used for “cruising” around. Often they have only one gear — which is fine if you live and cycle in a perfectly flat area. They are also occasionally referred to as beach bikes.

Also known as electric bicycles, pedelecs, or electric assisted bikes. These are bicycles with a motor that give assistance when cycling. They are available as hybrid bikes, mountain bikes and, recently, even high-end road bikes. While expensive, they are a great option for commuting in a hilly or windy area — and are a great option if you want to arrive at work without having to sweat! They also allow bike touring over much greater distances. The most recent e-bike technology will give assistance over ranges up to 150 km on a single battery charge.

Over the past decade or so the range of e-bikes has increased hugely.   Every type of bicycle listed here is now available as an e-bike with a variety of battery capacities, battery mount positions and motor types.

As the name suggests, they can be folded — making them very convenient for transportation or storage. Many folding bikes are surprisingly comfortable to cycle. They are a very good option if you have limited storage space or commute by train and bike.

These have a low laid back sitting position. While this may look uncomfortable, recumbent enthusiasts will argue that they are the most comfortable bikes of all.

A version of a road bike suitable for cycling in rough or muddy terrain.

The classic “bicycle built for two”. Tandem bicycles have seats and pedals for two riders, one behind the other.

This website uses cookies to improve your experience while you navigate through the website. Out of these cookies, the cookies that are categorized as necessary are stored on your browser as they are essential for the working of basic functionalities of the website. We also use third-party cookies that help us analyze and understand how you use this website. These cookies will be stored in your browser only with your consent. You also have the option to opt-out of these cookies. But opting out of some of these cookies may have an effect on your browsing experience.
Necessary Always Enabled
Necessary cookies are absolutely essential for the website to function properly. This category only includes cookies that ensures basic functionalities and security features of the website. These cookies do not store any personal information.
Non-necessary
Any cookies that may not be particularly necessary for the website to function and is used specifically to collect user personal data via analytics, ads, other embedded contents are termed as non-necessary cookies. It is mandatory to procure user consent prior to running these cookies on your website.
SAVE & ACCEPT